Erbium-doped fiber amplifiers (EDFAs) make use of rare-earth elements such as erbium (Er3+) as amplification medium. It is doped into the fiber core during the manufacturing process. It consists of a short piece of fiber (typically 10 m or so) made of glass in which a small controlled amount of erbium is added as a dopant in the form of an ion (Er3+). Thus, the silica fiber acts as a host medium. It is the dopants (erbium) rather than silica fiber that determine the operating wavelength and the gain bandwidth. EDFAs generally operate in the 1550 nm wavelength region and can offer capacities exceeding 1 Tbps. So, they are widely used in WDM systems.

The principle of stimulated emission is applicable for the amplification mechanism of the EDFA. When the dopant (an erbium ion) is in a high-energy state, an incident photon of the input optical signal will stimulate it. It releases some of its energy to the dopant and returns to a lower-energy state (“stimulated emission”) that is more stable. The figure below shows the basic structure of an EDFA.

1.1 Basic structure of an EDFA

The pump laser diode normally produces an optical signal of wavelength (at either 980 nm or 1480 nm) at high power (~ 10–200 mW). This signal is coupled with the light input signal in the erbiumdoped section of the silica fiber through WDM coupler. The erbium ions will absorb this pump signal energy and jump to their excited state. A part of the output light signal is tapped and fed back at the input of pump laser through optical filter and detector. This serves as feedback power control mechanism so as to make EDFAs as self-regulating amplifiers. When all the metastable electrons are consumed then no further amplification occurs. Therefore, the system stabilizes automatically because the output optical power of the EDFA remains almost constant irrespective of the input power fluctuation, if any.

1.2 Simplified functional schematic of an EDFA

The above figure shows the simplified functional schematic of an EDFA in which a pump signal from the laser is added to an input optical signal (at 1480 nm or 980 nm) through a WDM coupler.

This diagram shows a very basic EDF amplifier. The wavelength of the pump signal (with pump power of about 50 mW) is 1480 nm or 980 nm. Some part of this pump signal is transferred to the input optical signal by stimulated emission within a short length of Erbium-doped fiber. It has typical optical gain of about 5–15 dB and less than 10 dB noise figure. For 1550 nm operation, it is possible to obtain 30–40 dB optical gain. 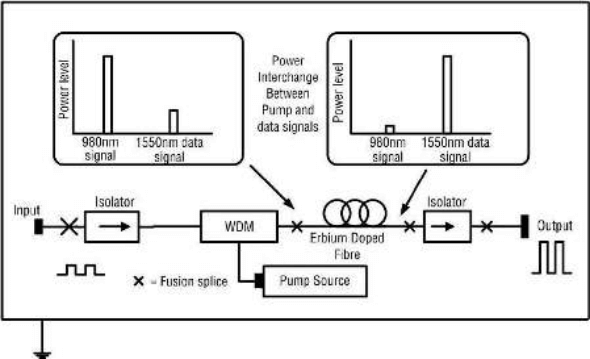 1.3 Practical realization of an EDFA

The above figure depicts a simplified operation of an EDFA with its practical structure when used in WDM application.

As shown, it includes the following major parts:

There are two types of structures of Erbium-Doped Fiber Amplifiers (EDFAs):

The figure below shows counter-propagating pump and bidirectional pump arrangements that can be used in EDFA structures.

Application of EDFA as booster, in-line, and pre-amplifier

In a long-haul application of an optical fiber communication link, EDFAs can be used as a booster amplifier at the output of the optical transmitter, an in-line optical amplifier along with the optical fiber as well as a pre-amplifier just before the receiver, as shown in the above figure.

It may be noted that in-line EDFAs are placed at 20–100 km distance apart depending on the fiber loss. The optical input signal is at 1.55 μm wavelength, whereas the pump lasers operate at 1.48 μm or 980 nm wavelength. Typical length of Erbium-doped fiber is 10–50 m.

As stated earlier, the amplification mechanism in an EDFA is based on stimulated emission similar to that of in laser. High energy from the optical pump signal (produced by another laser) excites the dopant erbium ions (Er3+) in a silica fiber at the upper energy state. The input optical data signal stimulates the transition of the excited Erbium ions to the lower energy state and results in the radiation of photons with the same energy, i.e., the same wavelength as that of the input optical signal.

Energy-level Diagram: Free Erbium ions exhibit discrete levels of the energy band. When Erbium ions are doped into a silica fiber, each of their energy levels splits into a number of closely related levels so as to form an energy band. 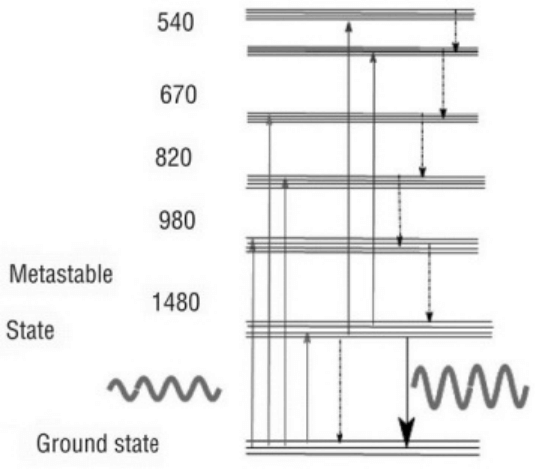 To attain population inversion, Er3+ ions are pumped at the intermediate level 2. In indirect method (980-nm pumping), Er3+ ions are continuously moved from level 1 to level 3. It is followed by non-radiatively decay to level 2, from where they fall to level 1, radiating the optical signals in the desired wavelength of 1500–1600 nm. This is known as 3-level amplification mechanism.

For more Erbium-doped products, please have a look in our website.