Optical fiber communication takes light as an information carrier to communicate. It can be transmitted through fiber core. However, not every beam of light is suitable for communication. Transmission loss varies with different waveband of light.  For achieving the less loss and being efficiently, scientists are always looking for the most suitable light.

In the early 1980s, scientists started to explore the technology of optical fiber communication in a practical way. Multi-mode fiber was what they mainly study about. With larger fiber cores, muti-mode fiber is able to realize one fiber transmission for muti-mode lights. 850nm wavelength light was the one that be applied firstly.

At the beginning of 1990s, single-mode fiber began to be used widely.

Scientists found out that 1260nm~1360nm waveband light could achieve the least signal distortion and transmission loss that caused by dispersion through tests.Therefore, they named these waveband light as O-band and “O” stands for “Original”. With trials and error, scientists found that the light with 1260nm~1625nm is also in the least loss area and is the most suitable light for fiber transmission.

Scientists also found the relations between transmission loss and wavelength. It is showing as follows. 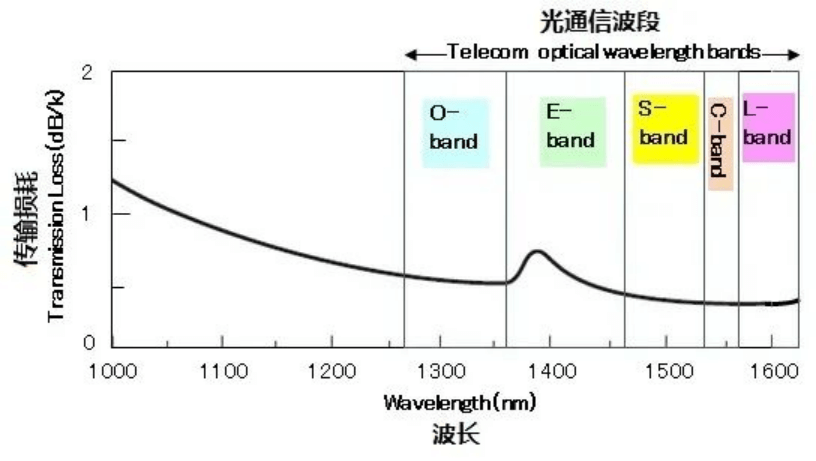 L stands for “long-wavelength”. L waveband can achieve the second least transmission loss and is also one of the main choice for industries. If C waveband is unable to meet needs of bandwidth, People usually will take L waveband as complementary.

S stands for “short-wavelength”. When it comes to fiber loss, it is higher than O waveband. It is usually applied to downward wavelength of PON.

It is the least common waveband among five kinds of waveband. E stands for “extended”.As shown from the figure 3, a bulge can be seen on E waveband. That’s because it was absorbed by OH- that leads to the huge transmission loss, which is also called water peak.

Except these waveband that mentioned, U waveband is also widely used, mainly on network monitoring.